Welcoming the End of Endless Summer With a Pair of Hot Dogs at Dogma Grill (Miami, FL)

Endless summer is an attractive idea. It’s sold on postcards, on TV shows, and in real estate marketing material up, down, and between the coasts of Florida and California. Chase the sun, chase the beach, chase the youth that is probably already behind you.

But if summer doesn’t change into fall and winter before returning again, what happens to it? Nothing goes on forever. In the long run, the relentless, heat-sucking, bond-breaking, and all-around destructive force known as entropy always wins. Things decay, gray at the fringes, fall apart. That’s how nature works. And that’s what you see in the motels that line the Upper Eastside of Miami, FL: entropy eating away at the idea of endless summer.

A walk along Biscayne Boulevard in the NE 70s reveals resort architecture at the end of its life span. The world has moved on to newer vacation spots, but these motels haven’t. For them, summer has finally ended, or is ending, depending on the address. 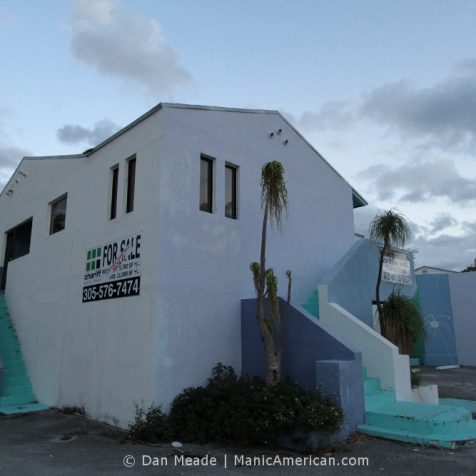 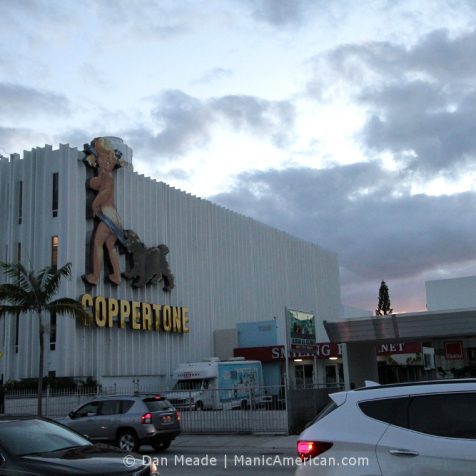 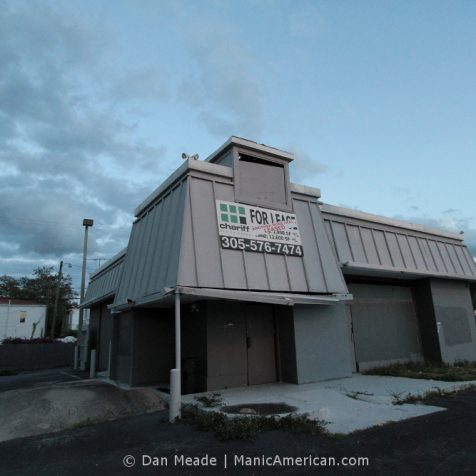 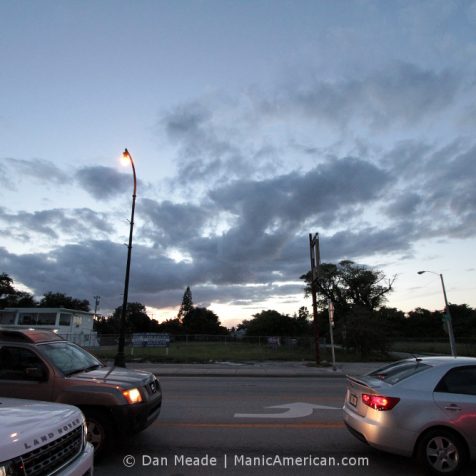 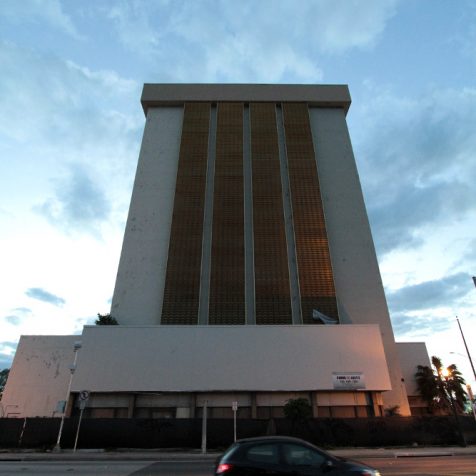 But the idea that helped bring these motels into existence remains. From Beach Blanket Bingo to Kylie Jenner’s Instagram, each generation tries to chase its own version of “endless summer.” That’s why, at the southern end of this strip, is a relatively new restaurant selling that quintessential summer food: the hot dog. Draped in retro-neon, selling its wares from a pair of windows as if it were on a boardwalk, is Dogma Grill.

Dogma is a more than sign of new life on this strip of decaying Art Deco buildings. It is, in many ways, a physical manifestation of the thoughts and tastes that many people associate with summer.

There, you can eat a hot dog outdoors on a pleasant night in any season. You can even ignore the counter girl’s warning and order two Dogma dogs instead of the one that most people get for dinner. 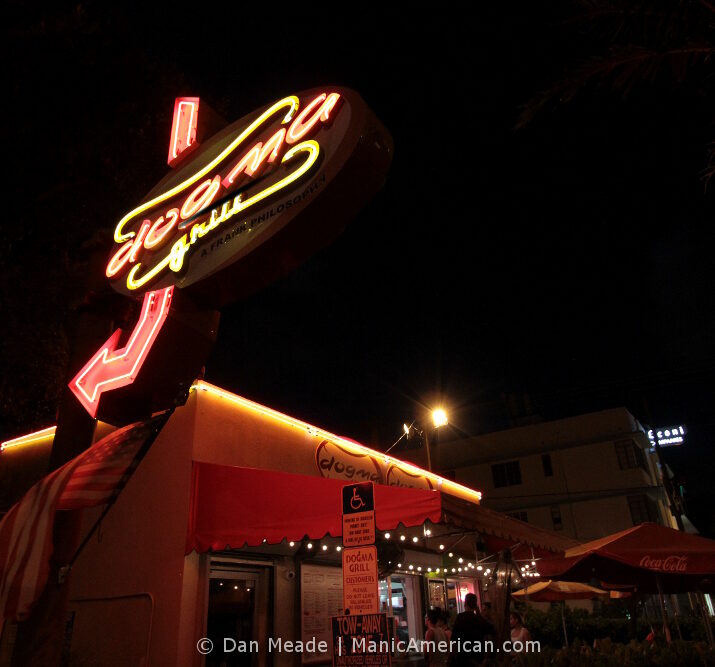 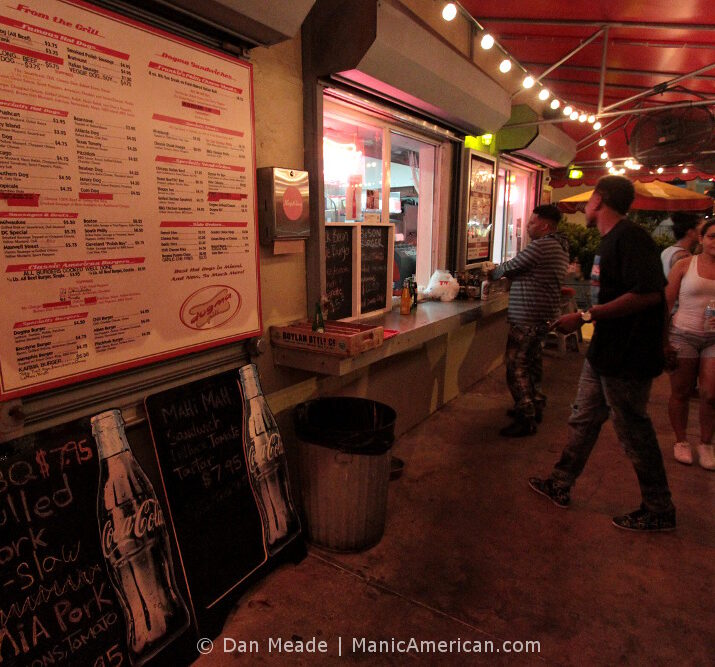 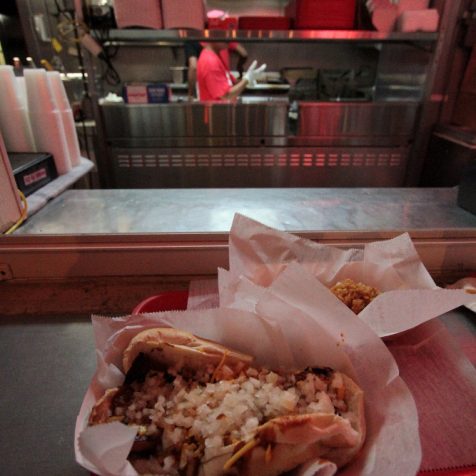 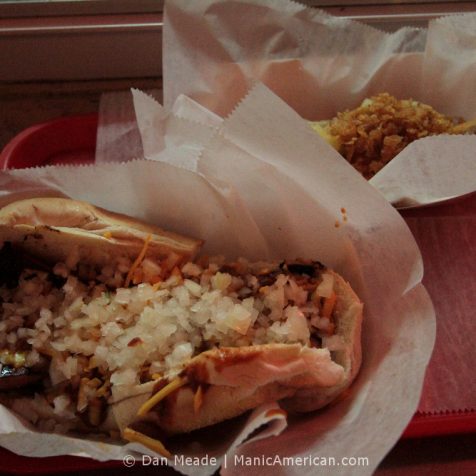 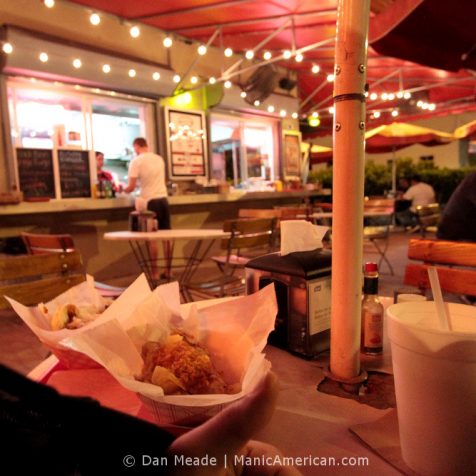 The two dogs are, of course, too much. One would have been enough. But really, amid the fading neon, the darkening sky, and a wind that that bears the oncoming chill of fall, who can really blame someone for trying to extend a fading summer one hot dog longer than it should last?

2017-09-05
Previous Post: Manic Kentucky Barbecue Adventures: A Fiery Welcome to Roy’s Bar-B-Que in Russellville, KY
Next Post: The Call or: How Henry Harrison Made Us Remember Elvis as a Man, Not a King