You Want to See… Japanese Baseball?

“Japanese baseball?” The front desk clerk glared into our jet-lagged eyes, almost with distrust. It was 5:26 a.m. on a Monday in Tokyo, which also happened to be Marine Day, a national holiday. There was no one else in the spacious lobby he could have been glaring at.

He asked again: “You want to see… Japanese baseball?”

“Yes,” we replied. And with an air of nervous skepticism, he told us that we would have to navigate Tokyo’s tangled railways to the Tokyo Dome itself, where we might be able to get standing room only tickets. Everything about the way he communicated this suggested that we would proceed at our own risk, and that the hotel would in no way assume responsibility for whatever fate befell us at the stadium.

The Yomiuri Giants would be playing their cross-town rivals, the Yakult Swallows, at 2:00, with gates opening up at noon. Worried that the game would sell out, we headed right there and got to the Tokyo Dome at…7:15 in the morning. 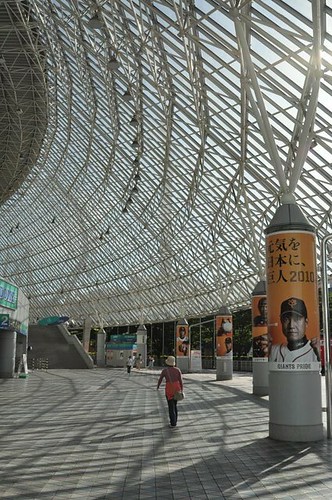 Or rather, we got to Tokyo Dome City at 7:15. The complete opposite of the Shea Stadium we’d grown up on, Tokyo Dome City includes much more than just a Dome, which locals call The Big Egg. There is a mall, a 43-story hotel, arcades, a water ride, a parachute drop, and a roller coaster that bisects buildings, all tucked into one expansive city block. At 7:15, there were already a few fans waiting for the game, but otherwise the place was deserted. With every box office closed, we left to see some more of Tokyo before game-time.

When we returned, Tokyo Dome City had become a celebration of life and of baseball: crowds now mobbed the amusement park and mall, with Doppler-shifted screams of frightened joy coming from the roller coaster. Hundreds of people were watching a stage show featuring the Giabbit, the bizarre bright orange mascot of the Giants who has the body of a rabbit and a head shaped to resemble the letters Y and G. Scores more stood in line to enter the stadium, the stores, and the Japanese Baseball Hall of Fame. With a little broken English and few hand gestures, we were able to buy a pair of tickets, pass through security, and enter the Big Egg. Once we found a place to stand behind the center field bleachers, we followed the lead of the locals, leaving paper on the floor to mark our territory. Then it was time to explore the stadium.

On the Dome’s “Fun Zone” level we found a vast space lined on each side by food and souvenir stalls, nicotine addicts contained within three gigantic, smoke-filled glass tanks that resembled human aquariums, and multiple versions of Giabbit entertaining the masses. A sudden announcement caused the fans to return to their seats. Brightly dressed concessionaires, including many young girls with beer keg backpacks, began to stream out of every doorway: the game was about to begin. We soon found out what would be the most shocking aspect of the Dome experience: the unwavering rabidity of the fans. It was nigh impossible to find a fan without a pair of Thunderstix, which rumbled and resonated throughout the stadium for the entire game. Every fan seemed to know that he could start a melodic chant at any time. It was a stadium of 55,000 people who knew all the lyrics and all the melodies, and they weren’t afraid to chime in.

The crowd switched from Japanese to English with their cheers and chants; the English chants seeming both foreign and shocking. There was the primary chant of the Yomiuri fans shout-singing “LET’S GO GI-ANT’, LET’S GO GI-ANT’, ” and the more violent “CUT IT TO THE BONE! CUT IT TO THE BONE!” There were dozens of indecipherable but very melodic chants in Japanese as well.

A few entire sections were wearing coordinated colors. As we looked closer, we noticed that at least three third base sections were full of Swallows fans. The fans from across town had brought with them a gigantic battle flag, trumpeters, and a drum corps. Even from across the stadium, the Swallows fans could be heard countering every Giants cheer with one of their own.

Curious to see the stadium from their perspective, we somehow got past the ushers and found ourselves deep within the Swallows sections. The timing couldn’t have been better–almost immediately, a Swallow hit a home run and the entire section filled with open umbrellas being thrust up and down–the Swallows’ fans way of saying that the Giants pitcher was done and had to hit the showers. The triumphant rage of the Swallows fans would not die down. Avoiding the swats of the ushers and anything called out to us in Japanese, we tore through the legions of visiting fans, trying to find the drum corps, the trumpeters, and flag wavers.

Just as the cheers began to die down and as the ushers’ patience wore out, Rob put his camera down to find an older fan watching him. With a menacing smile on his face, the fan flashed the peace sign to Rob and shouted, with rolled Japanese r’s, “Freakshow! Freakshow!” He was the only person out of 55,000 who seemed to acknowledge that this was all in good fun–everyone else was too intently focused on the game.

The Swallows went on to win 14-8, but we didn’t need to see the game through. We had to shoot Akihabara Electric Town and make it to the Metropolitan Government Building by sunset…