In March 2013 we spent a week embedded in Memphis befriending the locals while hitting the bars, music venues and barbecue joints in order to get a true sense of the city, its people and its culture.

When Eric Gales, one of most notable blues guitarists to come out of Memphis in recent years, returned home to play a show at Minglewood Hall, it felt less like a concert and more like a family reunion. As his show progressed it seemed like every other interlude had someone yelling a greeting or a relative coming on stage to perform. It was hard to tell who was there to see “Eric Gales the Raw Dawg” and who was there simply to see “E,” but even if you didn’t know him personally, you could appreciate how he called back to his past throughout the night. The show began with Gales, Orlando Thompson (bass) and Nick Hayes (drums) playing thick and heavy blues-rock. While a classic blues structure underpinned his playing, Gales’ music kept veering to a heavier, heartier sound that could be better described as blues-metal. Gales’ guitar-playing isn’t so much smooth as it is saucy – it may be fluid, but it will also sit atop everything else being played on stage, seep down into it and at times overpower the rest, leaving a mark that is unmistakably his own. As Gales played the audience would shout, cheer and wave their hats after funny bits of stage banter or particularly good guitar licks, but one moment stood out from the rest. After about five songs someone from the right of the audience yelled to Gales to get his attention. Once Gales saw who it was, the performer façade dropped from his face and he explained to the audience that before him was a friend who had been in an accident and suffered severe back injuries. The friend was sitting in a wheelchair and waving to Gales when another man behind him shouted out that they had a surprise for Gales: the injured friend was going to stand up to shake Gales’ hand.

A mix of amazement, joy and honor swept across Gales’ face as he walked over to the lip of the stage to meet his now-standing friend and shake his hand. The friend didn’t stay upright for long, but he stood long enough to show that he could do so under his own power. As Gales resumed the show his friend sat back in his wheelchair, head slightly bowed, hands clasped before him and with a smile of achievement spread across his face. It was a touching scene to witness and one that brought home the point that Gales had “come home” for this show. Gales, in his own words, is a “native boy of Memphis Tennessee.” He may now live in Greensboro, North Carolina with his wife LaDonna, but that doesn’t change the fact that Memphis is where he was raised, where his older brothers taught him to play the guitar and where he first broke onto the national music scene. While Gales didn’t speak much about feeling nostalgic during the show, his set list hinted that he may have been in reflective mood that day. Rather than playing music exclusively from the twelve albums he has released, he scattered his set with a number of guitar classics including “Knockin’ on Heaven’s Door” and “Sunshine of Your Love.” Considering when these songs were written, and how popular they were, there is a good chance that they were the types of songs his brothers used to teach him guitar. The bond that Gales shares with his brothers became evident when Gales brought his older brother Eugene on stage. Eugene initially came out to sing, but Gales soon handed Eugene one of his guitars so that they could play together. Dropping his attempt to refrain from cursing too much, Gales called it “a fucking treat, man” to be playing with Eugene again, and soon used the opportunity to turn back the clock to his childhood. Taking out a chair from the side of the stage, Gales sat down and played his guitar until Eugene walked over. With his older brother behind him, Gales dropped his hands to his knees to hold the base of the guitar as Eugene reached over his shoulders and began playing. As Eugene played, Gales’ eyes were locked on his older brother’s fingers, watching each chord change to see exactly how his brother played … just as they must have had done when the younger Gales was still learning how to play the guitar upside-down and left-handed. Once Gales let Eugene rejoin the audience he brought up another older brother, Little Timmy King. King had been in the front of the audience all night using his phone to shoot videos of  his younger brother play, but now he too took the mic to sing with Gales. While King didn’t play guitar that night (which he has done at other Gales shows), that didn’t seem to stop either of them from enjoying the chance to share the stage together. Before closing out the night, and after bringing his wife on stage for a second time to sing backup vocals, Gales gave a short speech to the crowd. He spoke of what it meant to him to be playing a hometown show and to hear the support and cheers from the crowd. He went on to talk about how his brothers inspired him to play guitar and that when performing live he hopes that he can in turn inspire others to play, that if he inspires just one person a night he considers his “job accomplished” as a performer. He then began playing a song by another left-handed African-American guitarist: “Voodoo Chile.” 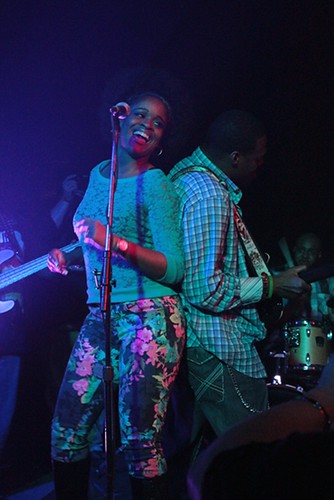 Ending his set with a new take on an old Jimi Hendrix classic was fitting. All night long, Gales had shown that while he is creating his own stand-alone body of work he is still part of a tradition that dates back to his family, back to Memphis and back to a legacy of all the other guitarists he covered.