You’re probably here because you like barbecue. But have you had thin-sliced, hot-smoked, and sauce-dipped Monroe County pork shoulder? Our goal was to track down this Kentucky barbecue delicacy in its native habitat. And, with a little help from a new friend, we found Miss Anita Hamilton cooking it near the Monroe County seat. 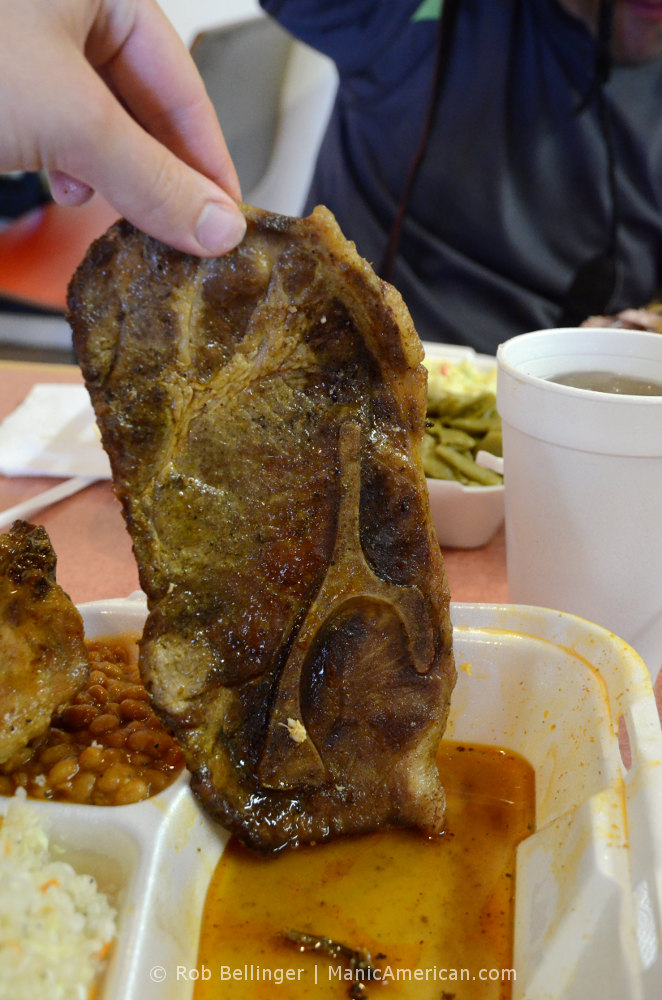 We’d enjoyed a fantastic introduction to this regional specialty at Bowling Green’s Smokey Pig, with a guided tour given by Dr. Wes Berry of Western Kentucky University. But the Smokey Pig is actually in Warren County, so we had a little driving to do. 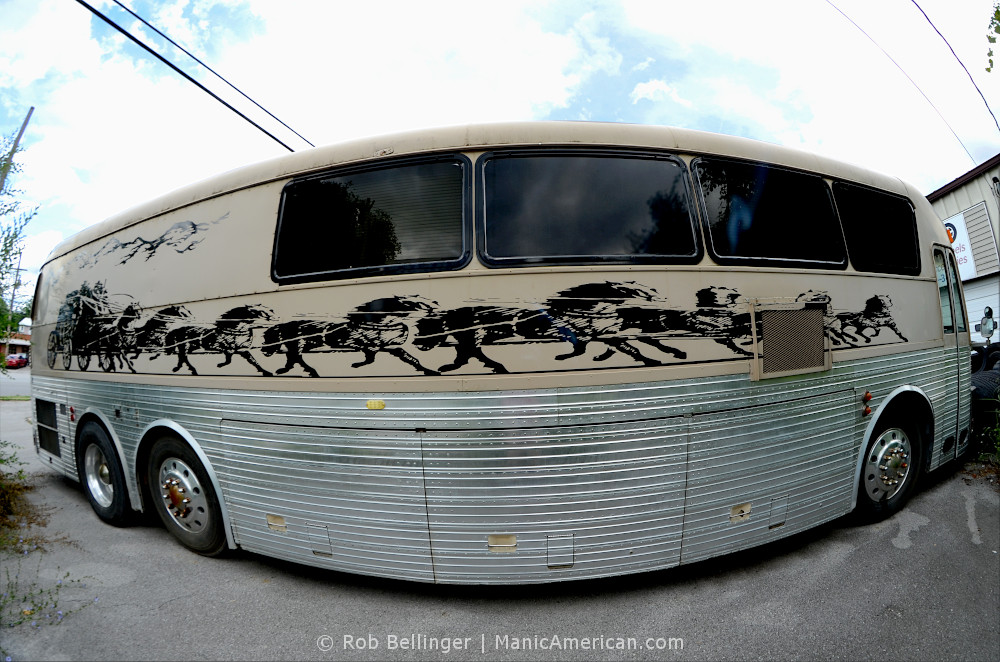 Kentuckians identify themselves — and each other — with the name of the county they’re from (you can read a little more about this in our dispatch from the Manchester Music Festival in Eastern Kentucky). That’s because there are a whopping 120 counties in Kentucky. Texas and Georgia are the only states that have more counties.

But, back to the pork shoulder. Wes directed us to head east to R&S BBQ in Tompkinsville, Monroe County. To get there, we’d have to leave Warren County, skirt the boundaries of Barren and Allen counties, and finally arrive in Monroe County. The drive would take just over an hour. We thanked Wes for being a great host and hit the road. 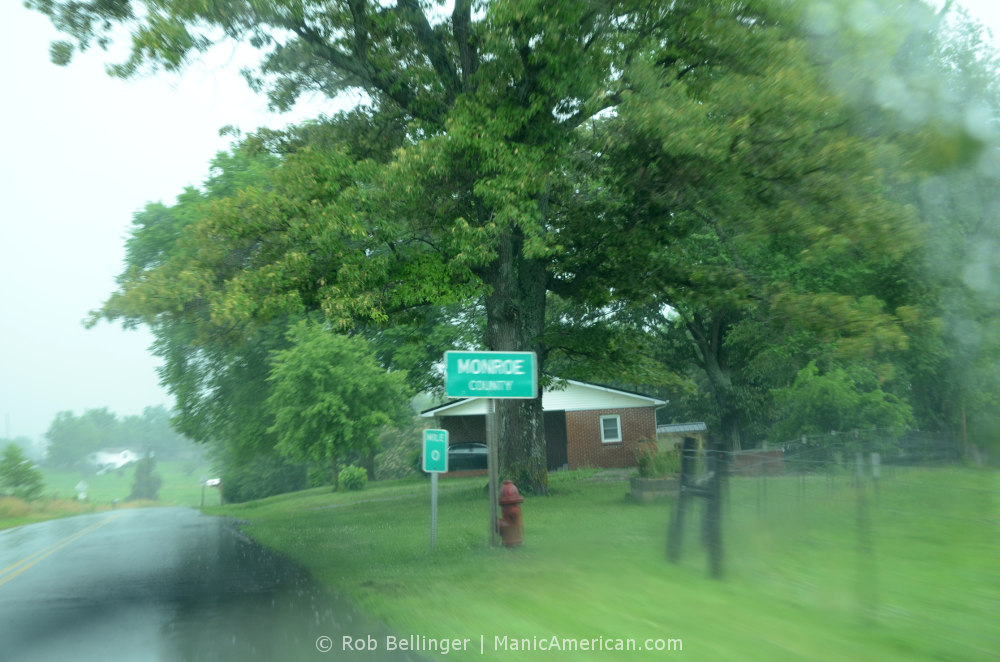 As we left the college town of Bowling Green, the rural quiet and intense summer sun periodically gave way to rolling thunder and torrential downpours, which you can sense in our photos. The scenery rapidly turned rural, dotted with churches, bible references, Amish hexes, and pleas for abstinence.

Tompkinsville, a home-rule city of about 2,400, appeared to be an outpost in the hills, where a few businesses met (and still meet) the needs of the surrounding country folk. We parked the car downtown by the courthouse and walked a few blocks to the outskirts, where we found R&S at the base of a hill.

Inside, owner Anita Hamilton gave us a big welcome:

“Are you those boys from New York? Professor Berry called to tell me about you two!” 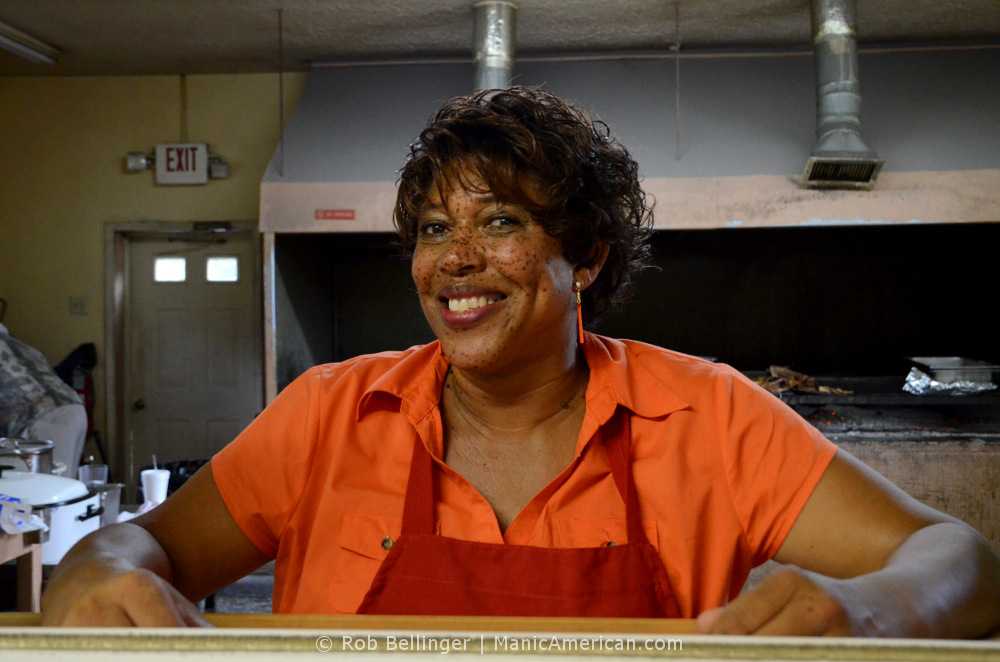 Wes had called her the second we’d left Bowling Green. And Miss Anita, as she’s known locally, had put aside samplers for each of us: two Styrofoam best-of boxes that included her own take on Monroe County shoulder, plus smoked pork chops and chicken quarters. She explained that she surely would have sold out of shoulder by the time we arrived, had Wes not phoned ahead on our behalf. More Kentucky hospitality! 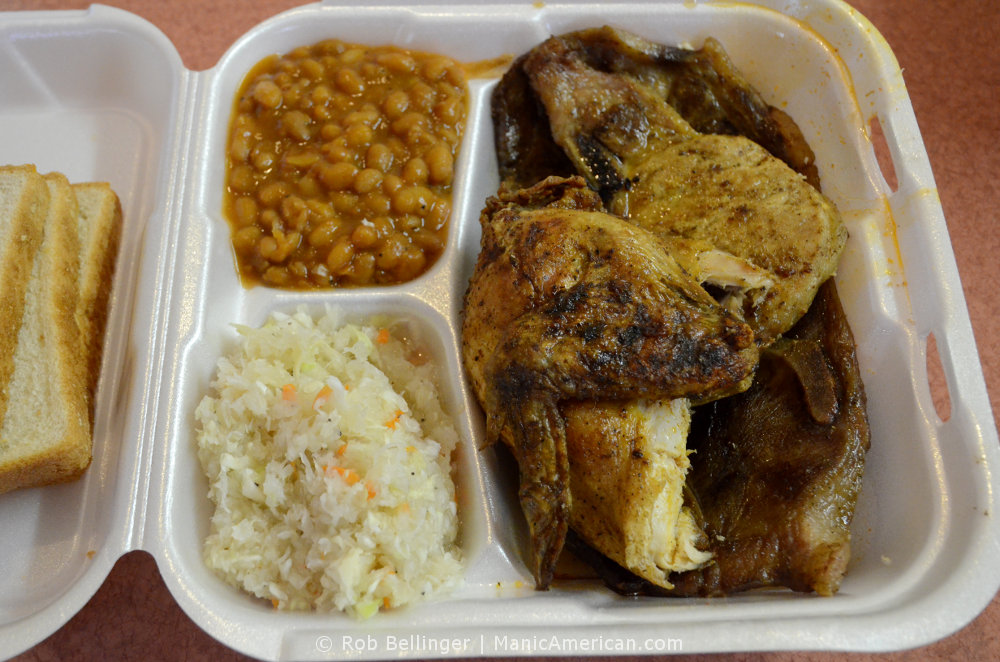 Miss Anita’s pork shoulder was sliced a little thicker than the Smokey Pig’s, probably a third of an inch thick before cooking, so it retained more moisture. Both the chicken and pork chop delivered strong hickory flavor. The vinegar in the dip perfectly accented that flavor of true smoke. 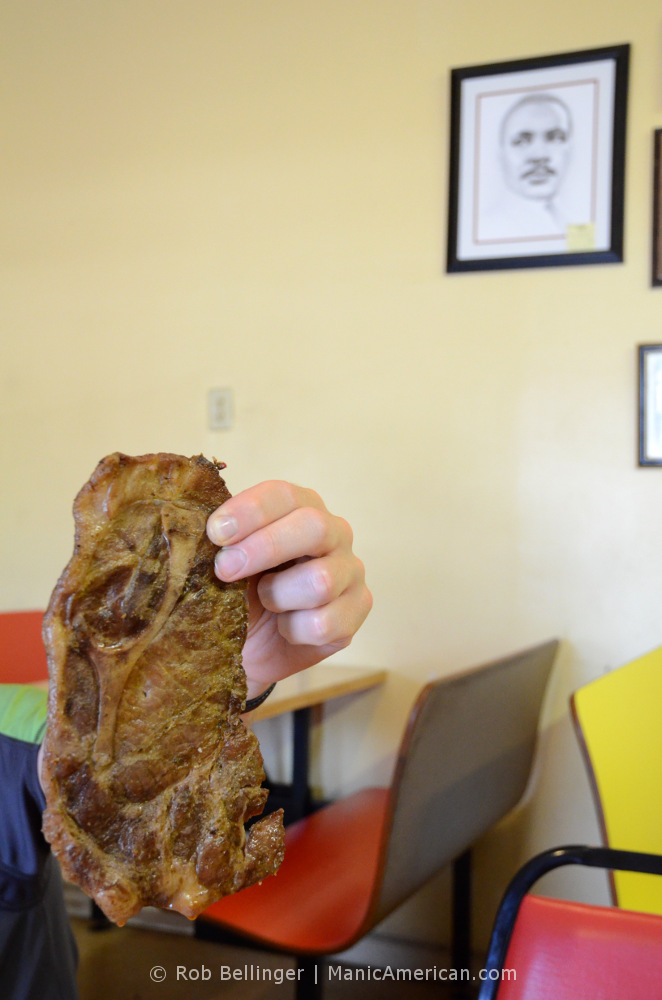 We couldn’t even finish our three-meat combos, which, by the way, were not on the menu. We took a few minutes to attempt a little digestion. As soon as we became ambulatory again, we approached the counter to chat with Miss Anita.

She explained that she had her meat butchered locally to her specifications. She also told us that her restaurant was, as of our 2014 visit, the only Black-owned business in town.

To cook and flavor her meat, Miss Anita employed a true barbecue purist’s setup: a long cinderblock grill, fueled by homemade hickory charcoal. Out back was a steel cauldron for burning down logs, and a woodlot of hickory logs waiting to be split and burned down into barbecue fuel.

We shot some photos of the woodlot under an increasingly foreboding sky.

It was a Tuesday afternoon, and the majority of barbecue establishments in Monroe County only operate on weekends. At that point, we couldn’t possibly have eaten any more, anyway. So we said farewell to the R&S crew, and we headed back to basecamp in Bowling Green.

Heavy rains would fall all night long, canceling the Bowling Green Hot Rods minor league ballgame we’d planned to attend. But that didn’t stop us from enjoying a beer and a tour of town with our host, legendary WKU swim coach Bill Powell.

We offer our sincere thanks to Wes Berry, the Smokey Pig crew, and Miss Anita for being such fantastic hosts. And to three generations of the Powell family for putting up with us, and putting us up. Hope we can do this again one year!