“I always say to people, ‘You should take a cross-country trip at least once in your life. The people you meet and the things you see…’”

I had already finished my square of Mother Futcher’s coffeecake and my Clamcake Po’Boy when the conversation shifted to “where else you’ve been” mode. Mary was talking about how, a few years ago, she and Brian “Hoss” Coddins sold all their belongings, bought a 19-foot trailer, and drove across the country. Mary didn’t give any details about who they had met or what exactly they had seen, but she didn’t have to. She could tell that I knew what she meant. And if I wanted more details there were six panels of menu items I could come back to converse over. 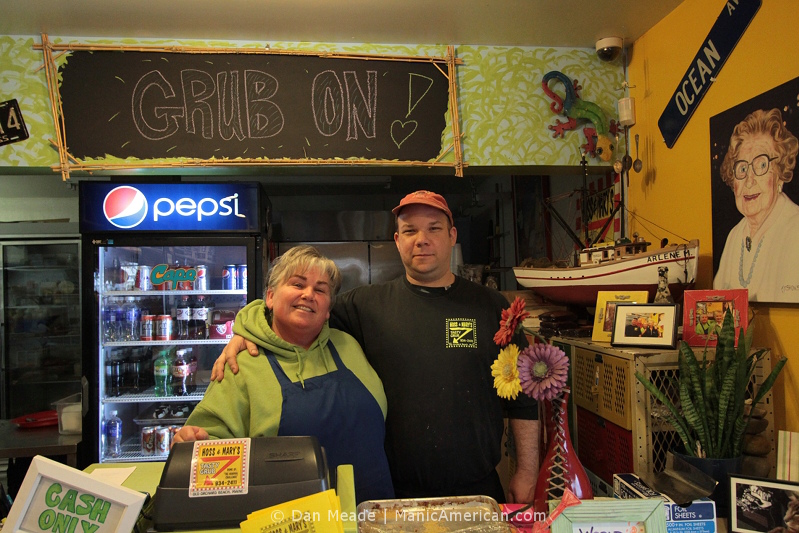 Hoss and Mary run a sandwich shop of the same name in Old Orchard Beach, Maine. Hoss runs the kitchen and Mary the counter. If you sit inside long enough, you’ll hear her greet customers by name, and if they’re short a dollar, she may just proclaim the bill squared away. You don’t need to read the mat by the door to feel welcomed.

Hoss and Mary’s specializes in sandwiches, burgers, and as their motto puts it, “Peace, Love, & Tasty Grub!” The grub was certainly tasty enough to warrant two visits, but really, it was the first two thirds of the motto that brought me back the second time.

Old Orchard Beach, or “oh oh bee” as the cab dispatchers call it, is not a booming town in the off-season. I was there in early April, weeks before many hotels and stores open, and a full month before the town’s train station would open. Walking through the downtown streets was like being on a ship staffed by a skeleton crew: there were only a few other people around, but you knew that there would soon be many more.

This wasn’t a bad thing though, especially on the shore. Devoid of blankets, umbrellas, and tents, the oceanfront vistas were stupefying beautiful, and especially so at sunset. The reflective wet sand and dearth of people gave the shore a dreamlike quality where land, water, and sky all merged into one realm instead of three.

But there is a limit to how much solitude is desirable. After a while you want to be welcomed into someplace warm, and to join the conversation therein. It just so happened while I was in Hoss and Mary’s the proprietors and the other customers were talking about Revere Beach, and all of its pros (roast beef) and cons (lunch-snapping seagulls). I quickly chimed in to add to the storytelling.

A few laughs and a full stomach later, and my sense of solitude was long forgotten.

By the end of the Revere conversation I knew I wanted to come back to Hoss and Mary’s to try another sandwich. Rather than just choosing one myself, Mary and I hatched a plan to post a poll on Facebook to see what I should eat the next day:

Our new fan “Dan” is coming in tomorrow for lunch. He either wants A. East Meats West B. Chi Chi Rodriguez Or C. Cuban Haddock . What do you think he should have and why? This is important! Why do you like them?

Their fans didn’t just vote in the poll — they took the time to argue the merits of each sandwich in their comments. And that’s when it clicked. Hoss and Mary weren’t just a gregarious couple serving food in a brightly painted restaurant. They were creating a community around their food. Welcoming people by name, taking the time to stop and talk to them, giving bacon to hungry-looking dogs… people didn’t just come here to eat sandwiches, they came to eat sandwiches served by people who cared about them.

How much do Hoss and Mary care? Enough to abandon the meal that had brought them national attention. 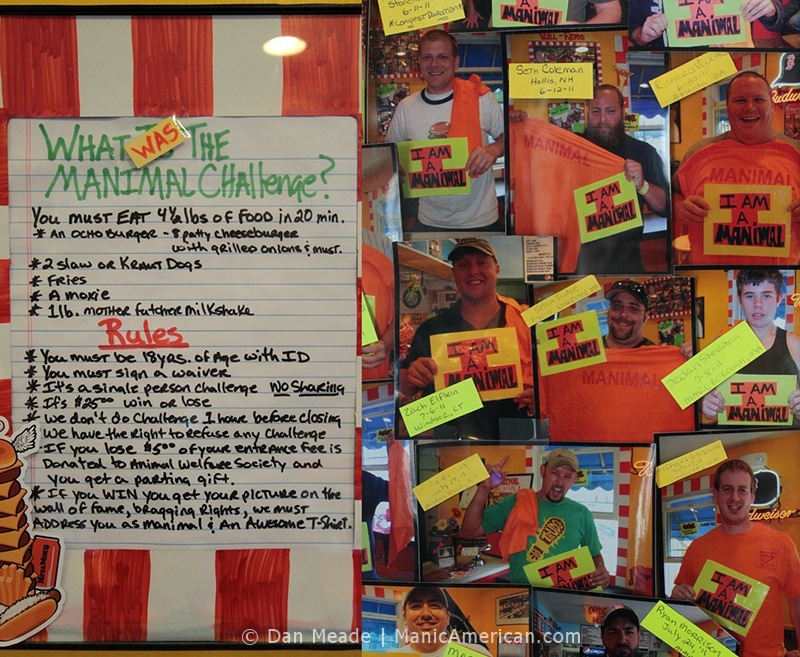 When I asked Hoss about this, his reply circled around one theme:

He let the last part trail off a bit, but he didn’t need to finish it. They didn’t want anyone to get hurt.

Plenty of other restaurants would cling to a claim to fame like the Manimal. But Hoss and Mary put the safety of their overzealous and gastronomically adventurous customers first and laid the Manimal to rest.

As soon as I walked into Hoss and Mary’s the next day I heard Mary shout out “Hi Dan!” before I was even fully through the door. I ordered the poll-winning Cuban Haddock and a Mother Futcher’s coffeecake Milkshake to wash it down with. Except this wasn’t the kind of shake you wash meals down with. 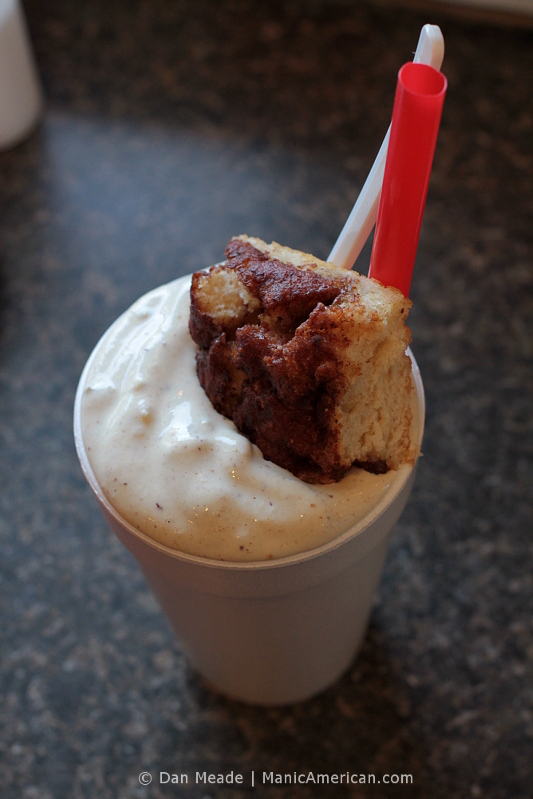 It was thick. The butter pecan ice cream was heavy on pecans, and the more I drank, the more I could taste chucks of coffeecake inside the shake. It came with a spoon, but that hardly seemed strong enough. Midway through the shake I began wishing I could borrow a pitchfork from the clammers out on the beach. 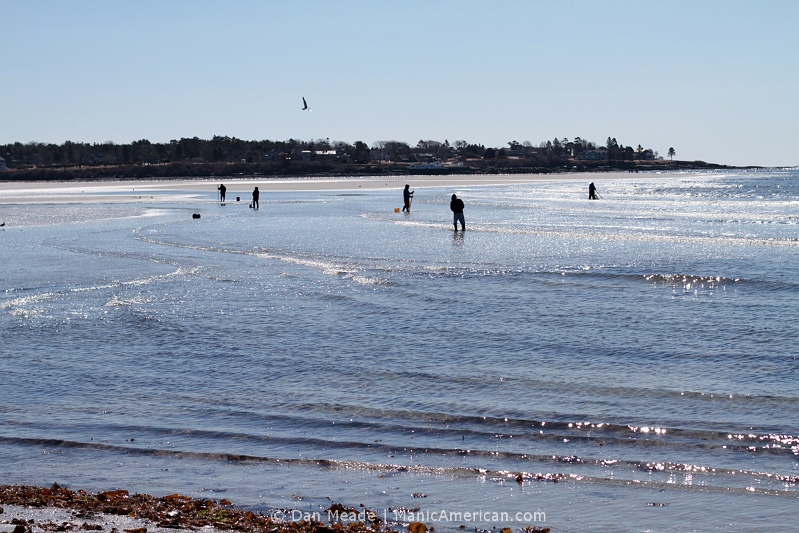 Then the Cuban Haddock was up. It was on a sub roll like the Po’Boy the day before, but this looked even bigger. Lightly fried, the fish was flavorful and pieces flaked off easily. Just as Mary had said, the onion and Sriracha sauce was hot enough to add flavor while not being overpowering. The slaw was a little wetter than I normally like, but it offered a nice crunchy counterbalance to the sauce. 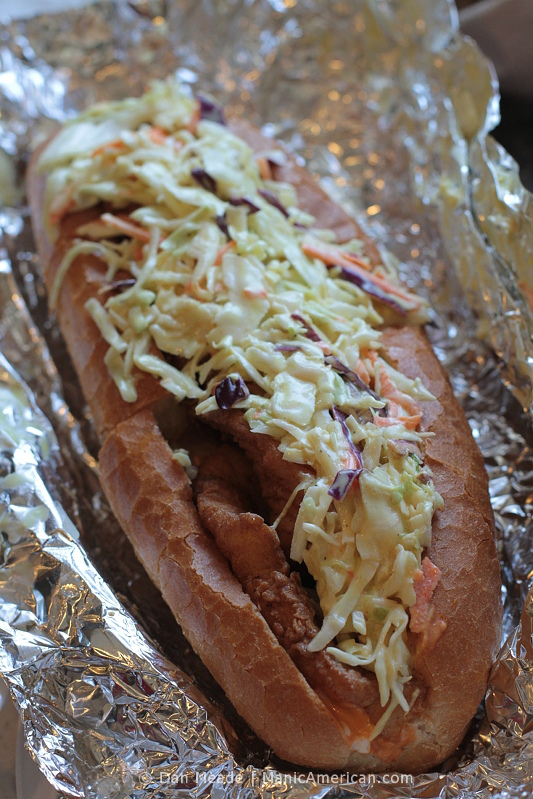 It took me about 30 minutes to eat the sandwich, ten more than allowed for in The Manimal Challenge.

That realization brought me back to another restaurant in another off-season beach town. Years earlier, in Ocean City, Maryland, my friends and I ate so much at an all-you-could-eat seafood buffet that we developed statistics to determine who had eaten the most. Each person’s “per plate average” was weighed against a convoluted shrimp-to-crab leg ratio that was supposed to level the eating field for all the “contestants.”

In other words, we were the kind of group that definitely would have tried The Manimal Challenge.

But the heyday of the Manimal has long since passed in Old Orchard Beach. With the Challenge ended, Hoss and Mary have paved the way for their customers to focus on enjoying their food instead of going to war with it. You might even say that they’re keeping their business true to the words in their motto. 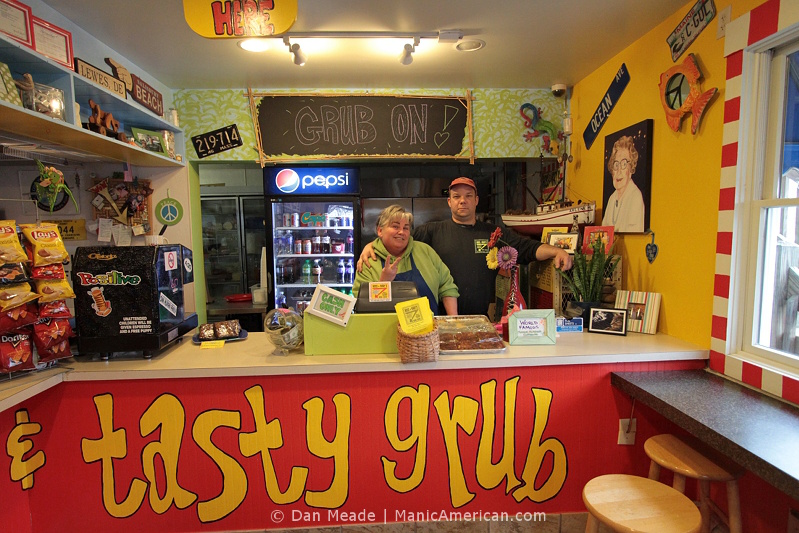 2014-04-22
Previous Post: Up All Night: Riding the Late Night T Service in Boston
Next Post: What Would Keytar Bear Do?