Stop me if you’ve heard this one before: with a crowd riled up and expecting greatness, a band comes out on stage in a highly stylized uniform. They start playing, heating up the crowd further, before their charismatic leader makes a grand entrance and goes on to lead the band through a very tight set that involves a theatrical stage presence and choreographed dances. By the end of the set, after a cape has been placed around the singer’s shoulders, they exit for the encore break. Once back, the band plays an elongated version of a hit song that includes the singer lording over all their subjects, band and crowd alike, before leaving to a chorus of horns, strings, jumping, and shouting.

Sounds like vintage James Brown, right? It also sounds like Janelle Monáe’s performance at the 2012 Afropunk Festival in Brooklyn.

Monáe capped off the second day of the festival’s Red Stage performances. Smaller than the grass-lined fields of the Green Stage, the Red Stage covered the concrete half of Brooklyn’s Commodore Barry Park and faced the FreeCycle Action Sports Team bike quarter-pipe, and beyond that, the skate park and a series of local vendor booths. MilitiA, the red-haired and shoulder-spiked hostess of the Red Stage, had described her stomping ground as the “angry” stage and the Green Stage as the “hippie” one, full of “babies and blankets.” Whether or not that was the best way to describe the two stages, one thing was certain – all the interesting things were in MilitiA’s realm.

Early in the afternoon, the final rounds of the two-day, Nike-sponsored skate competition were held. With younger skate rats and photographers crowding the sightlines, the finalists flew over the ramps and staircases trying to outdo one another, with cheers and groans accompanying the best tricks and worst wipeouts. When the Flatbush Zombies took over the skatepark for their set, the park was swarmed with people fighting through, and jumping over, the fences to watch them as multiple clouds of smoke floated over the crowd. (Best deal of the day? The guy who bought half a spliff for $5 from the woman next to him.) Later, as Bad Rabbits led the crowd through a few beats of “Thriller” dance moves, a remote-controlled helicopter-mounted camera shot the scene from overhead.

There was a lot going on inside the park. 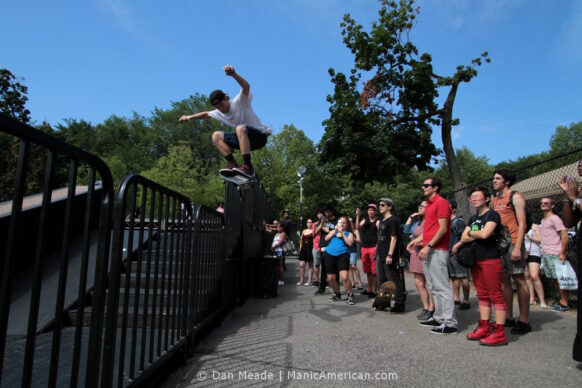 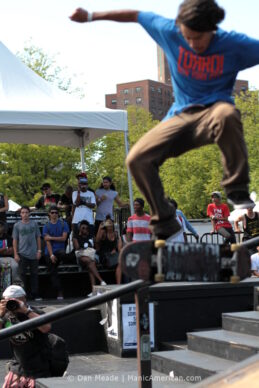 Outside the park a line of food trucks served as a kind of blockade, fencing everyone on Navy Street in between them and the park. Snaking through one of the few gaps in this roving food fortress was a line that wrapped around the park, dotted every half-block or so with people selling water and other beverages out of coolers. Among these cooler vendors were the Bedford-Stuyvesant Ambulance Corps giving away water in exchange for $1 donations while shouting, “The life you save may be your own.”

Back inside at the Red Stage, the build up to the main attraction officially began when MilitiA announced that Gym Class Heroes would not be appearing (to a round of boos) but that Janelle Monáe would instead play a longer set (to a round of cheers). 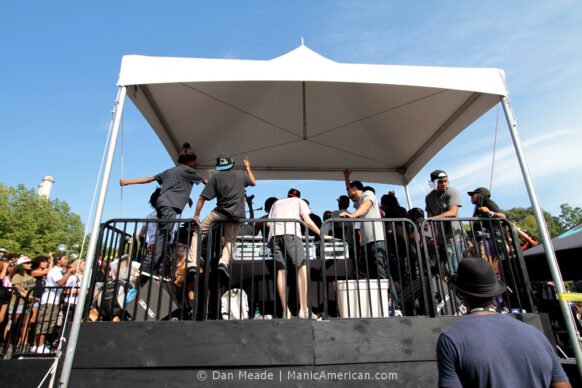 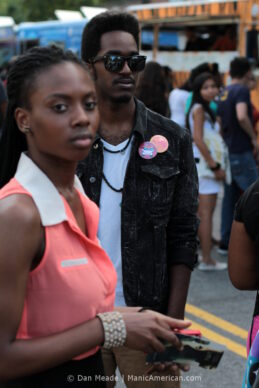 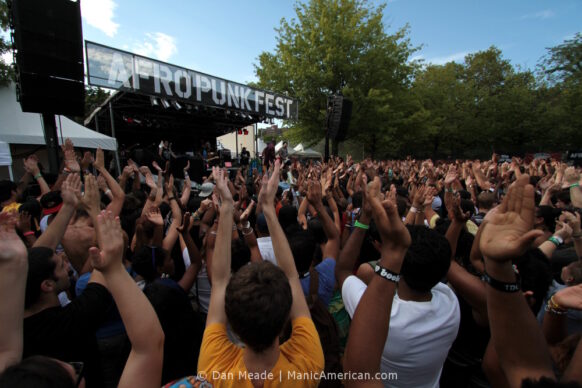 The announcement made, E.Z.Mo Breezy of Grits & Biscuits resumed his role DJ-ing in-between the bands’ sets. His final round of music included Jay-Z, Nirvana, the Beastie Boys, sing along choruses, rapid hand waving and a series of sly remarks and flirts directed to those in front of him. He also helped locate a missing child who turned out to be watching the FreeCycle bike team fly overhead off their ramps. Once found, the child was passed through the crowd to his family like a tiny-mosher making his way to the stage.

As the sun began to set, the FreeCycle ramps closed and Breezy gave control of the crowd back to MilitiA, who in turn brought out unannounced guest Pharrell to introduce Monáe. Some of the smartphones that were thrust in the air to capture an image of Pharrell remained there, held aloft in anticipation of Monáe’s entrance.

First came her band, complete with string and horn sections, all decked out in variations of Monáe’s trademark black and white outfits. Some looked ready for a black tie ball, others like haute couture models, and some like Stormtroopers. After a barker shouted an opening salvo to the crowd, the band began playing as three figures in oversized Grim Reaper cloaks stalked the stage. One of the Reapers was Monáe, who shucked the cloak, spun and leaped towards the microphone, and began her performance.

Complete with props (a ray gun, neon-lit microphone staff), full stage choreography, and a group of musicians who moved with, for, and by her whim, Monáe controlled the stage. In between her own songs – including “Locked Inside,” “Cold War,” and “Tightrope” – that straddled the line between R&B, soul and funk, she played covers of Jimi Hendrix’s “Little Wing” and The Jackson Five’s “I Want You Back,” each eliciting a rush of excited recognition from her audience. And it was her audience, she held them the whole time.

“Come Alive (The War of the Roses),” her encore song, may be the best way to explain her ownership of all those before her. As her signature forward-thrusting coiffed hair came undone as she and her band jumped around the stage looking like a Tim Burton feverdream about a showboat being attacked by the B-52’s (“Come Alive” and “Rock Lobster” share a bass line lineage), all eyes remained on Monae. When she commanded her band to lie down on stage, each did as she commanded. Turning her attention to the masses before her, each section of the audience sang along to the song as Monáe turned her gaze upon them, open handed, as a queen might guide her subjects. When she too collapsed to the stage, two of her dancers beckoned and pleaded for her to arise. Once she did, her band rose as well, bringing the song to a crescendo as she leaped into the crowd. Returned to the stage, the band played as Monáe exited stage right, following one of the oldest rules in showbiz: leave them wanting more.

“Come Alive” is less than three-and-a-half minutes in its recorded form. At the Afropunk Festival she stretched it to over ten minutes. The way she played with it, teasing it out, challenging the crowd to sing along, she could have done so for over fifteen minutes and it’s doubtable that anyone would have minded.

This sort of elongation at a festival with “punk” in its name should seem verboten, but it wasn’t. Afro-punk was founded in 2002, not to blast out two and half minute songs, but to give “a voice to thousands of multicultural kids fiercely identifying with a lifestyle path-less-traveled.” Monáe made a similar statement about her own trouble with coming to terms with feeling alone and realizing no one else was like her as she introduced “Cold War.” Viewed in this light, as a focal event to bring like-minded people together, this ten-minute song wasn’t a bloating moment of grandiosity. It was an attempt to keep everyone together for a little bit longer, to keep all the individuals, punks, and assorted misfits united, to keep the spirit of the festival flowing.

As if to confirm this, as the Red Stage crowd left the park to go home, the sound of TV on the Radio closing out the Green Stage could be heard. The show had ended, but the music that was reason for bringing everyone together played on.

2012-08-29
Previous Post: This Photo Proves That We All Need to Go to More Rock Shows
Next Post: From 0 to Brisket in 48 Hours: The First Voyage of the Manic Smoker